Go to the main content of the page
News 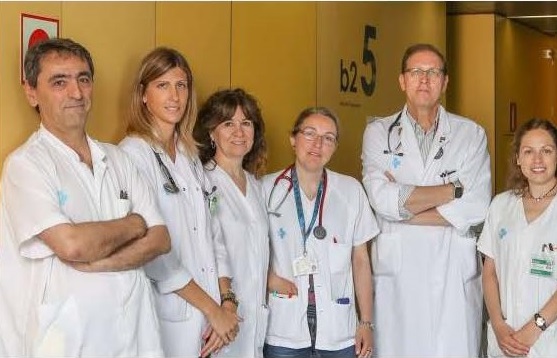 The Radiation Oncology Service of the University Hospital Arnau de Vilanova has taken another step forward in the fight against cancer through the improvement of the Radiation Oncology Service. He has done so by incorporating leading technology to treat the disease and through the Radiation +++ project, of transformation of the Service through art.
Radiation +++ is a collaborative project between the University Hospital Arnau de Vilanova and the Center d'Art la Panera, which was created in 2017. The program, in which a dozen artists collaborate , has the support of the Daniel Foundation and Nina Carasso.
The uniqueness of Radiation +++ lies in the fact that the project does not only seek to humanize the Radiation Oncology Service. The pioneering aspect (since the University Hospital Arnau de Vilanova is the only hospital in Spain that is doing this type of project) resides in the quest for the interaction between artists, patients, expacients, relatives and professionals of the Service Everyone works with a common goal: to use art to transform space and improve the experience of the entire hospital community. "It is a project that we have made ourselves and that has managed to involve the whole team. We firmly believe we have seen that it helps to improve the experience of patients and professionals, "said Moises Mira, head of the Radiation Oncology Department. "We do not place work predisposed by the artists, but interventions are based on interviews and surveys to detect the real needs of patients, relatives and staff of the Service," added Roser Sanjuán, responsible for the Education area of the Panera.

Until now, they have participated in the Radiation +++ program, the Lleida artist Lara Costafreda, who has turned a gray space without natural light into a colorful and lively place; the members of Domestic Data Streamers, who have worked on pictorial and interactive disciplines; the Basque illustrator Josune Urrutia, who has promoted an illustrated dictionary on cancer, and playwright Jaime Conde-Salazar. The next artistic residence will be carried out by Luna Coderch, who will propose a sound intervention in the bunker to improve the patient's experience.

The Radiation +++ project was awarded on April 2 at the 35th edition of the Awards of the Catalan Association of Art Critics (ACCA). Among the five finalist proposals in the education category, the jury acknowledged "the innovation of using art as a means of social mediation, promoting the participation of the entire hospital community in a collective creation project."

The Hospital opens a new radiation accelerator
On the other hand, the University Hospital Arnau de Vilanova has premiered the new linear accelerator Truebeam, funded by the Amancio Ortega Foundation with a budget of two million euros. The new machine allows to offer more precise treatments and with less side effects than the machine that had until now, which has been replaced. With the new system, the steps and the time necessary to place the patient are shortened (the system identifies each patient before beginning the session), obtain the images and apply the treatment.
The University Hospital Arnau de Vilanova has two linear accelerators and the Truebeam has replaced the oldest one. Thus, the new machine complements the other accelerator currently available for the Radiation Oncology Service, which will allow two machines of similar characteristics to be available. In this way, the continuity of the service will increase and the patients' expectations will be shortened if there is any breakdown due to breakdown or revision, as they can be treated indistinctly by either of the two machines.
The new accelerator is the result of a donation from the Amancio Ortega Foundation to Catalan public health, after signing an agreement with the Generalitat in 2017 to renew oncological equipment (accelerators and mammals), the total amount of which reaches the 47 million euros.